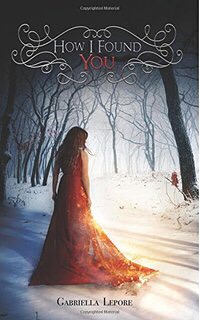 It has been an embarrassingly long time since I posted a review. Part of this is because of my busyness, and thus laziness when it comes to reviewing, and another part is because I’ve been seriously considering going into BookTube, so I’ve been thinking I’ll just save my reviews for then. However, I still haven’t found the time to start a YouTube channel, so I figured I’d better quit putting it off and review some books!
So, the book I’ll be reviewing today is a book I found on the Amazon kindle store, in their unlimited books section. Meaning, I pay $10 a month and I can read as many unlimited ebooks as I like 😊 It’s an awesome idea, and it would be even more awesome if there were a bigger selection of “famous” books such as We Were Liars or The Matched series. But, just because the books on there aren’t amazingly popular doesn’t mean they aren’t worth reading. That’s the whole reason I’m writing this 😉 Because How I Found You was a lovely and unexpected book. It was paranormal and romantic and fresh. It was a book that, when I woke up at 3am, I told myself I’d only read for a few minutes, but that I stayed up until 5:30am to finish.

How I Found You is, in short, about a teenager, Rose, staying with her aunt and uncle for the summer because her parents are too busy traveling the world for work. Once she arrives there, two mysterious and sexy guys knock on the door claiming car trouble and would like to stay the night at her aunt’s house. And for reasons that baffle Rose, her aunt and uncle agree without question that these strangers can stay. One of these boy gives Rose the major creeps, but the other boy seems somewhat familiar to her. Couple this with the bizarre dreams Rose is having about death, and you are in for a summer you’ll never forget.
The things I loved about this book were the original storyline, the magic/romance, the character believability, Rose’s general badassery, and the way the storyline had me second-guessing myself until the end. Even though you think you know how the story is going to end from the beginning, it ends up ending totally different than you thought! Also, although this might be a slight spoiler, when these mysterious boys arrive at Rose’s door, they seem vampire-like. And honestly, I’ve read so many vampire novels, I almost didn’t want to keep reading. But! Let me tell you, I was so wrong about it. When you find out what these guys actually are, you’ll warm to this book even more!

A few things I wish this book had included was more backstory about the boys! I want to know more about the magic of their world, more about their pasts, and just more in general. But maybe that’s just because I loved their characters, and we’re always greedy with book boys 😉

Overall though, I enjoyed this book so much! That’s why I’m giving it 4.5 stars ⭐️ and telling all of you to go out, join Amazon unlimited for the first free month, and read this book! It’s a quick and refreshing read.