I’m realizing, while looking at my stats for this blog, that I haven’t been posting very regularly on here. Which I feel badly about. I guess I’ve just been so busy with life stuff that I sort of forget how many days go between posts. Time flies when you’re having fun, and sometimes when you’re not. 😉

Anyway, to make up for it, I’m posting two reviews in one! I also thought this might be a bit easier for everyone, since the two books I’m reviewing are the second and third books in a series: The Raven Cycle. I reviewed the first book in this series, The Raven Boys, a couple weeks ago after finishing it in just a couple days. You can read that review here. Since then, I’ve marathoned the next two books, The Dream Thieves and Blue Lily, Lily Blue (click the titles to view their Goodreads pages). And if you know me at all, you know I can fly through a series when I’m enjoying it. My bookish friends have told me that The Raven Cycle is like a black hole that’s sucking me in. And maybe it is. But through all the fangirl feelings, shipping, and browsing the internet for fan-art and tumblr posts, I’ve been enjoying the ride into oblivion.

I suppose I’ll split this review into two sections, one for each book, although many of my feelings overlap. Especially since I read them in a row,  and I might interchange a few of the events. #BookNerdProblems 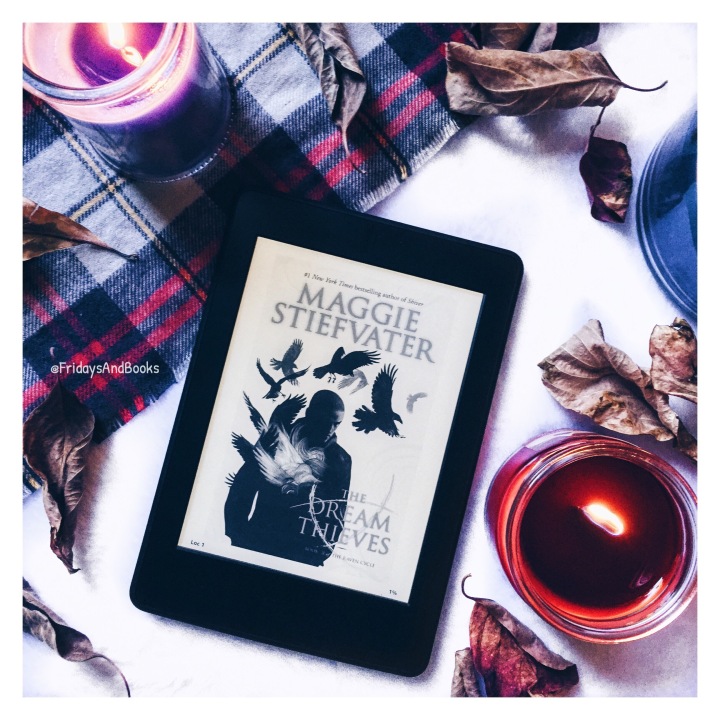 Even though people really love this series and that should have given me confidence, I was still a little nervous to tread into a sequel so quickly after reading the first book. Cause, what if it sucked? I didn’t want a negative light shining on an otherwise awesome first book. But this second installment was so awesome. It was definitely comparable and maybe even better than the first?

One of my favorite aspects of this book was learning more about Ronan’s past. He’s a pretty mysterious character, who seems like kind of a low-grade asshat all the time, and I enjoyed reading more about why he is that way. I love his family dynamics, his powers, Chainsaw, and basically everything else about him. Especially his relationship with Gansey, Adam, and Blue. It makes me so excited for a future trilogy following him. 😏

Another thing I loved was the real-world elements brought into this magical world. Blue’s crazy family? A hit man? And Adam’s  struggles? I loved it all. It made everything feel so realistic, like it could really be happening in your own quiet town.

The thing that made me the saddest, but also happiest, were the moments with Noah in them. My heart breaks for everything he goes through, especially because there is no real way to help him without loosing him. But God, he’s just the cutest. I love that him and Blue get along so well. And that in a funny way, him and Ronan can be playful because they really understand each other.

I basically have no complaints at all. This book was well-written, perfectly paced, filled with lots of mystical happenings, and flawed characters. It makes me want my own pack of Raven Boys. 😉

“Reality is what other people dream for you.” 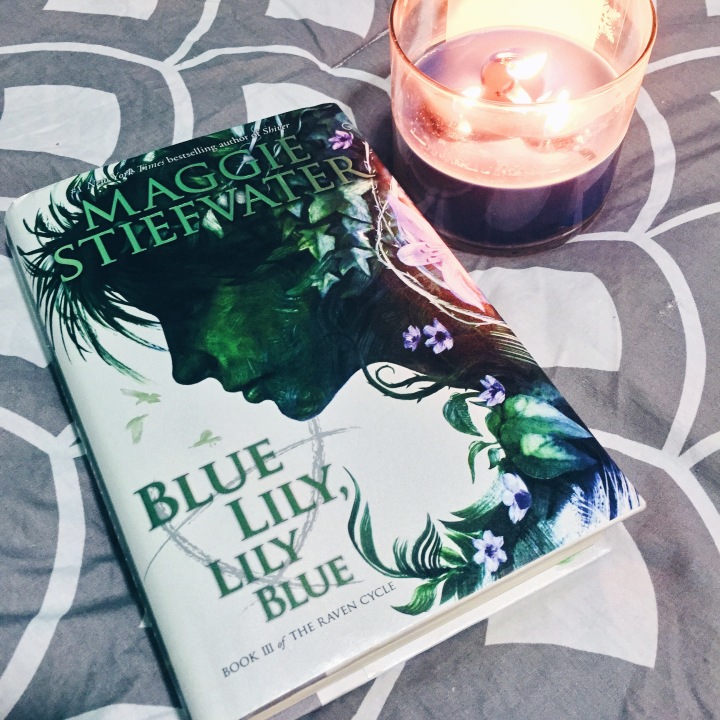 Oh, book three… This book was maybe the best yet! I loved how it carried the story along, both supernatural and mundane. If possible, I loved the Raven Boys and Blue even more for all the things they do for each other. The forbidden romance was also alive in this one.

“Blue,” he warned, but his voice was chaotic. This close, his throat was scented with mint and wool sweater and vinyl car seat, and Gansey, just Gansey.

The magic was also very alive in this installment. The introduction of a few new characters was welcome and honestly, hilarious. Although there was plenty of tension, I laughed out loud numerous times. But I also cried. My emotions ran high throughout this book.

The character development was also spot on. I love seeing Adam change the most, I think. Something about his tragic pain and big dreams really gives you something to connect with. Although there are times you just wanna smack him upside the head, or have Ronan do it, you still love him. Speaking of Ronan, damn, he’s the best. You learn so much about his character and really understand his motivations. And also some of his magic. You begin to realize Ronan is much less a sidekick to Gansey and maybe a king all his own. I ship him and Adam so hard. It’s bad 🙈

“As they moved through the old barn, Adam felt Ronan’s eyes glance off him and away, his disinterest practiced but incomplete. Adam wondered if anyone else noticed. Part of him wished they did and immediately felt bad, because it was vanity, really:

See, Adam Parrish is wantable, worthy of a crush, not just by anyone, someone like Ronan, who could want Gansey or anyone else and chose Adam for his hungry eyes.”
– Blue Lily, Lily Blue

Now, I’m going to gush a bit about Blue and how badass she is. I love her fierce attitude, her snarky comebacks, and how she stays grounded surrounded by mayhem and magical people. I also adore seeing Gansey through her eyes. When he loses the mannerisms of old money and careless comments, and becomes just a boy in glasses looking for something to make him feel worthy of each breath.

The moments with Noah broke me even more. But I loved every second.

If you’re hunting for a magical world that will leave you lusting for more, give you major feels, and stress about how it will all end happily, definitely pick up this series and enter this magnetic fandom.

In the words of the author, you’ll learn all this: 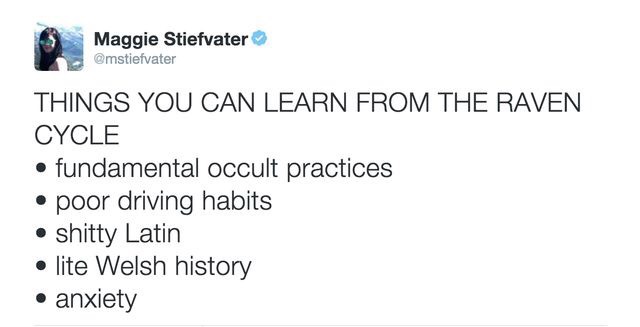 What more could you want? 😂 Also, #AuthorGoals