I’ve been a bit on the busy side lately, so I apologize that my posting has suffered! But I’ve been finding little bits of time to get some solid reading in, which means a couple more review to come soon. 😉

Today, my review will be a short one about the first book in The White Rabbit Chronicles series, Alice in Zombieland. Here is the Goodreads page where you can read all about it. Now, if you love Alice in Wonderland and scifi like I do, you’re probably thinking this book sounds like the bombest of the bomb. A retelling of Alice falling down a zombie hole? Heck yes! However, that’s not really what this book was about. I read in another review on Goodreads that your expectations of this book can make it or break it for you. And I think that’s pretty true. The synopsis of this book is fairly vague, so it allows your imagination to run away with the title and create a world where a new Alice falls into an undead world of zombies and mayhem. At least, mine did. What my imagination didn’t expect was a story about a new Alice who lives in a completely mundane world, until her family is killed and she begins seeing zombie “spirits” that only a few other people can. Now, it’s not that I didn’t enjoy this novel, it’s that the actual plot just didn’t line up in my mind like I thought it would. Which made the first bit of the book kind of disappointing, if I’m honest. So, if you are interested in this book, be prepared for more of an urban fantasy than a twisty scifi. But since I did enjoy this book, let’s get into the good parts! 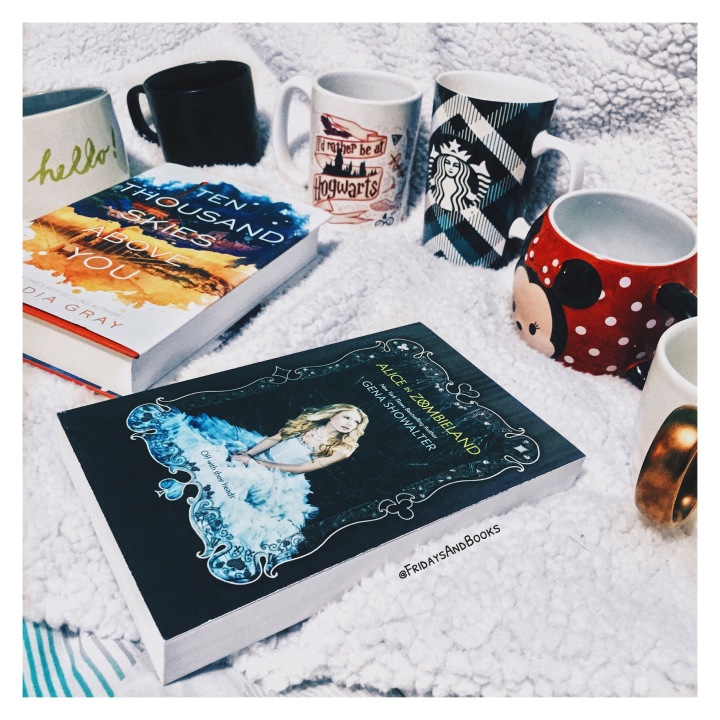 To start off, I really enjoyed Alice’s character. She was sassy and pretty kick-ass, even in

the face of some serious mental trauma. I do feel that the book addressed her pain and grief pretty well though, which I also liked. I feel like sometimes books don’t want to be sad or just get to the action, so the characters basically have no feelings. 😂 That wasn’t the case here. Another thing I loved was the sidekick, i.e. Alice’s best friend Kat. She was super confident and would have been obnoxious with her self-flattery had I not loved her so much. Which, coincidentally, is I think exactly how Alice feels about her. Her character also takes on a much more serious dimension further into the book, which made her more relatable and believable as a character.

Now, the hot piece of book boyfriend! Cole was introduced as a badass, bad news, tough guy with a man-pack of equally tough friends. He is also described as undeniably sexy and Alice can’t resist. I’ve read in a few reviews that some people didn’t like the “instalove”. However, I didn’t see it as love. I saw it as instant attraction on a major level. Which is totally believable in my book. And in this book 😉 So don’t be scared off thinking this turns into a romance. Most of the romance scenes were more steamy than dreamy, and didn’t distract from the plot but I thought added to it.

The zombies were also interesting to me, because once I realized that this wouldn’t be a “down the rabbit hole” type deal, I was wondering how the world wouldn’t go to hell with zombies running around. 😉 Most of the zombie books I’ve read are dystopian, in case you hadn’t noticed. I liked the magic aspect and how the zombies and the “sight” worked. I thought some things could have been explained more fully, but I’m guessing that some information has been held back for later books. Which I’m okay with. I feel like my understanding is about par with Ali’s, and she’s out there kicking zombie ass. The fight scenes in this book were pretty good as well. I felt on the edge of my seat for a couple of them. Which is always the sign of a good action flick.

So, overall, I really enjoyed this book. Although it’s not what I was expecting, and honestly doesn’t incorporate many classic Alice in Wonderland ideals, it was a fun read that I zoomed through in a couple days. If you are able to get past the fact that it’s not much of a retelling, I think you’ll enjoy it too!

If you’ve read this book, what did you think? I’m starting the second book in the series, Through the Zombie Glass as soon as I post this review. Is it silly that I’m holding out hope more classic Alice will pop through in this second installment? Fingers crossed!

18 thoughts on “Review: Alice in Zombieland by Gena Showalter”